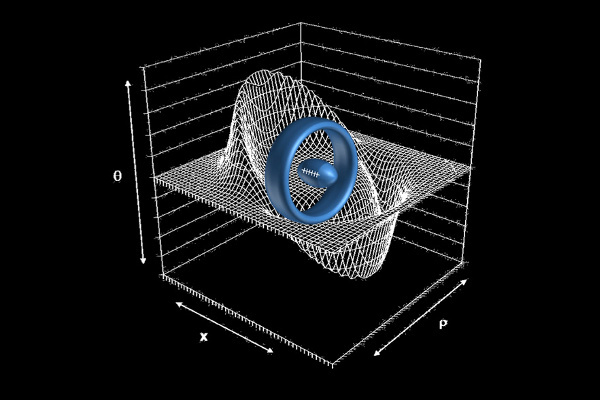 So far in this series I have given the definitions of vectors, scalars, tensors, and manifolds. As a result, much of this series has been mostly mathematics and not necessarily physics. To that end, the purpose of this post is to develop the salient points of special relativity. Namely, the intention of this post is to cover the following:

This post is meant as a “quick recap” of the main features of SR and is by no means comprehensive. For more of the finer details, consult the following resources

Featured Image: Image Credit: Harold White. **I understand that the derived metric describing the contraction and expansion in front and behind of the craft may be inaccurate. I just thought that this would be an interesting concept to think about**

The featured image of this post shows what spacetime would be like if an engine would look like if it were to be created. One of the most well-known ideas in modern physics is that there exists a cosmic speed limit, the speed of light in a vacuum,

. This engine would allow the persons on board to get around this rule by moving spacetime around the craft, instead of themselves moving. The aft portion would contract the spacetime in front of the craft and the stern section expands the spacetime behind, resulting in something that resembles the image above.

However, such an engine requires an exotic form of matter. Something that is able to be synthesized theoretically yet would be practically insurmountable in cost. For those of you who are interested for more details, the paper that derives the required metrics can be found at:

be two inertial reference frames in which

is moving at a constant velocity with respect to

. The figure below is what is meant by “standard configuration”:

are in standard configuration. The two frames are such that their origins

(not shown above) are coincident at

There are two ideas that Einstein assumed when developing his theory of special relativity: the principle of relativity and the constancy of the speed of light. The first of which states that the laws of physics are the same in all inertial reference frames. In a more technical sense, dimensions perpendicular to the direction of motion of a given inertial frame remain unchanged. To be more precise, if we have the two frames

in standard configuration, one of which we shall assume to be moving with constant velocity in the

direction, then the dimensions

remain unchanged under a coordinate transformation.

The other postulate that Einstein put forth was that the speed at which light propagates in a vacuum is invariant. Contrary to Newton, Einstein said that the speed of light remained the same and it was space and time that changed. I will talk more about this when I talk about the Newtonian and Minkowski geometries.

Development of the Lorentz Transformation Matrix:

in standard configuration. Suppose there exists an event P which we define using the coordinates

. Suppose we wish to determine the coordinates of this event in terms of coordinates

. Then we may relate the coordinates of the two frames via the following system

. We can write this more succinctly as

where we have made use of the Einstein summation convention in which it is implied that we sum over repeated indices. The term

corresponds to the coefficient matrix that can be constructed from Eqs.(1) and is given by

This is the Lorentz transformation matrix. We may also write

as column vectors and write the matrix equation Eq.(3).

Discussion of the Newtonian Geometry of Spacetime:

NOTE: In this section, and in the next section, I will be stating the transformation equations. I will not be deriving them since I believe that this exercise is more enlightening when accomplished independently.

In 1687, at the recommendation of astronomer Edmond Halley, Newton published the first edition of the Principia. In those three volumes, Newton set forth the laws of Nature regarding motion, gravitation, and his independent discovery of calculus (a debated topic that I will not be talking about; however I do acknowledge the tremendous contributions that Leibniz made to the development of modern-day calculus). In the Newtonian realm, space and time are regarded as absolute. As a result, such an absolution requires that the velocity with which an object travels be subject to change. To relate this to relativity, consider the following example:

Suppose my buddy and I (because we were bored and we love physics) decide to measure how long it takes a train car to travel the length of the platform of the train station. Suppose further that I am observing from the platform and my buddy observes from the train. Once the train begins to move we both signal to each other to start our observations. According to Newton, because time and space are absolute, both my buddy and I record the same time. Suppose my reference frame is

and my buddy’s reference frame is

. The event that I measure can be transformed into my buddy’s reference frame via

These equations constitute the Galilean transformation equations wherein the second equation corresponds to our everyday experience of motion. The time equation here tells us that time remains invariant under such a transformation. The quantities

comprise the Newtonian geometry of spacetime. The latter of which is what is known as a metric. A metric in this context corresponds to a distance of sorts between two events

. As an example, in Cartesian coordinates the metric is given by,

We may represent a metric in other coordinate systems as well. A future post will discuss in detail metrics and the metric tensor

Discussion of the Minkowski Geometry of Spacetime:

The Newtonian geometry of space and time, namely the assumptions of absolute space and absolute time, stood as the prevailing theory for quite some time. That is, until Einstein came along. Einstein’s interpretation of space and time came from taking Maxwell’s equations and deriving the following equations

is called the Lorentz factor. If we graph this quantity as a function of

we get the following figure (link to a document, I couldn’t find a way to upload an excel graph): lorentz factor graph_2. This term represents a relativistic correction of sorts in the above equations.

Upon comparison of the two types of transformation equations (i.e. the Galilean and Lorentz equations) one sees that in the former space and time can be shown to be two entirely different constructs. While the latter shows that space and time must be considered as a unified entity. The problem below shows that (see below) that the interval

remains invariant under a Lorentz transformation. In this case, the metric tensor

From this it follows that the interval may be written as

I will discuss this further in a future post. Since the components of the metric tensor are of this form, we may refer to this space as Minkowskian or flat space.

Problems on Invariance under Transformations:

A typical problem that is covered in most relativity texts is to show that the interval remains invariant under a Lorentz transformation. The following is my solution to the problem. I highly encourage working through the problem on your own before seeking guidance and furthermore, I strongly recommend that you complete the problem prior to reading my solution.

Let us consider the interval

frame. Let us rewrite this as

where the last two components (the y and z components) remain the same automatically by the principle of relativity and hence vanish from the equation. Applying a Lorentz transformation, we get

After some algebra, we end up with

In the algebraic steps implied here, we end up with space and time terms as measured in the unprimed inertial frame

. Furthermore, we form the differences in the x-spatial direction and time between the two events so as to form an interval in

. We can simplify this further to give the final interval equation

Hence we see that the interval remains invariant under a Lorentz transformation. Minkowski was the one who noticed first that the Lorentz transformation equations show that space and time cannot be considered separately. This idea of spacetime as a four-dimensional entity (manifold, really) with no curvature is referred to as Minkowskian spacetime. It is also known mathematically as being pseudo-Euclidean.

Most of this post was my own understanding of special relativity augmented by the references listed above. The problem solved in the final section was obtained from [1]. I have not covered topics such as relativistic kinetic energy, time dilation, relativistic addition of velocities, relativistic momentum, length contraction, and the twin paradox. Depending on how this post does, I may work on a follow-up post on these topics. As mentioned above, I will be posting something about the metric tensor and more on interval equations using index notation. I am unsure as to when that will be up, but I will do my best to find time. If there are any errors or if my reasoning does not hold up anywhere, leave a comment and let me know and I’ll correct it.