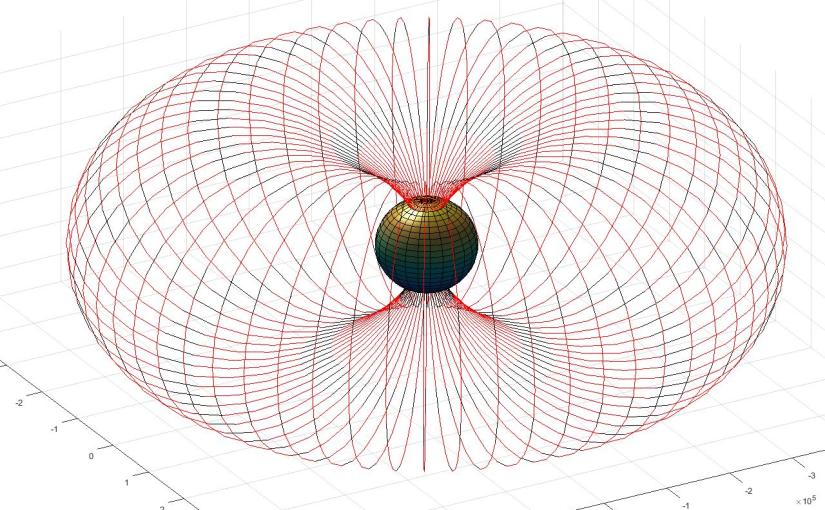 In the previous post we saw the consequences of different regimes of the magnetic Reynolds’ number under which either diffusion or advection of the magnetic field dominates. In this post, I shall be doing a “proof” of Alven’s Theorem of Flux Freezing. (I hesitate to call it a proof since it lacks the mathematical rigor that one associates with a proof.) Also note in this post, I will be working with the assumption of a high magnetic Reynolds number.

Alfven’s Theorem of Flux Freezing: Suppose we have a surface

located within a plasma at some initial time

. From the theorem it is known that the flux of the associated magnetic field is linked with surface

At some later time

, the elements of plasma contained within

move to some other point and will constitute some different surface

. The magnetic flux, linked to

from which we may mathematically state the theorem as

If we know that the magnetic field evolves in time in accordance to the induction equation we may express Eq.(3) as

To confirm that this is true, we note the two ways magnetic flux may change as being due to either (1) some intrinsic variability of the magnetic field strength or (2) movement of the surface. Therefore, either way it follows that

is displaced some distance relative to

. Further, let us also suppose that this displacement occurs during a time interval

Additionally, if we imagine a cylinder formed by projecting a circular cross-section from one surface to the other, we may consider its length to be

with area given by the cross product:

. Moreover, since we know that the area of integration is a closed region we see that the integral vanishes (goes to 0). Thus, we may write the difference

Recall the definition for a derivative, we may apply it to the second term on the right hand side of Eq.(5) to get

and applying it to Eq.(8) we arrive at

Recall that we are dealing with high magnetic Reynolds number, if we use the corresponding form of the induction equation in Eq.(9) we arrive at

Thus, this completes the “proof”.